Smoked at low temperatures to preserve enzymes and nutrients in the Dulse.

The Irish dulse is smoked using oak, beech and fruit woods to give it a subtle natural smoky umami flavour.

Smoky Dulse powder can be used in smoothies, soups, chowders, sandwiches, eggs and salads, or added to bread/pizza dough, it can be used as a flavour enhancer in meat dishes, such as chili, in place of monosodium glutamate or use as a salt replacement.

Palmaria palmata, also called dulse, dillisk or dilsk (from Irish/Scottish Gaelic duileasc/duileasg), red dulse, is a red alga (Rhodophyta) previously referred to as Rhodymenia palmata. It grows on the northern coasts of the Atlantic and Pacific oceans. It is a well-known snack food in Ireland, It has been an important source of fibre throughout the centuries.The erect frond of Dulse grows attached by its discoid holdfast and a short inconspicuous stipe epiphytically on to the stipe of Laminaria(kelp) or to rocks. It has a short stipe, the fronds are variable in colour from deep rose to reddish purple and are rather leathery in texture. The flat foliose blade gradually expands and divides into broad segments ranging in size to 50 cm long and 3–8 cm in width which can bear flat wedge-shaped proliferations from the edge.

All Emerald Isle Seaweed has be tested for chemical, pesticides and water quality.

Health
Dulse is a good source of minerals and vitamins compared with other vegetables, contains all trace elements needed by humans, and has a high protein content.
It is commonly found from June to September and can be picked by hand when the tide is out. When picked, small snails, shell pieces and other small particles can be washed or shaken off and the plant then spread to dry. Some gatherers may turn it once and roll it into large bales to be packaged later. It is used as fodder for animals in some countries.
Dulse is commonly used in Ireland, Iceland, Atlantic Canada and the Northeast United States as food and medicine. It can be found in many health food stores or fish markets and can be ordered directly from local distributors. In Ballycastle, Northern Ireland, it is traditionally sold at the Ould Lammas Fair. It is particularly popular along the Causeway Coast. Although a fast-dying tradition, there are many who gather their own dulse. Along the Ulster coastline from County Antrim to County Donegal, it is eaten dried and uncooked similar to how one would eat snacks at a drinks party.
Cooking:
Dulse’s properties are similar to those of a flavour-enhancer. It is commonly referred to as dillisk on the west coast of Ireland. Dillisk is usually dried and sold as a snack food from stalls in seaside towns by periwinkle-sellers.
Fresh dulse can be eaten directly off the rocks before sun-drying. Sun-dried dulse is eaten as is or is ground to flakes or a powder. In Iceland, the tradition is to eat it with butter. It can be pan-fried quickly into chips, baked in the oven covered with cheese, with salsa, or simply microwaved briefly. It can be used in soups, chowders, sandwiches and salads, or added to bread/pizza dough. Finely diced, it can be used as a flavour enhancer in meat dishes, such as chili, in place ofmonosodium glutamate.
Dulse contains iodine, which prevents goitre 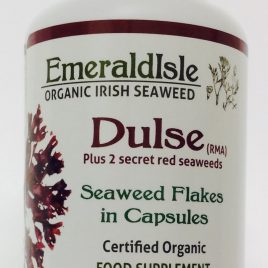 Emerald Isle Seaweed Dulse flake capsules, or RMA, are a natural combination of three strains of red marine algae, which is combined according to our own family recipe. Certified Organic by the Irish Organic Farmers and Growers Association. Emerald Isle Red Seaweed Capsules (RMA) are a natural source of Iodine, which supports healthy thyroid function and is good for general health and skin condition. Total of 45 grams of pure 100% Red Seaweed in 500 mg capsules with nothing added. A total iodine content of around 132 mcg in each capsule. Daily serving Size 1-2 tablet (HPMC capsule). Suitable for vegetarians and vegans. Capsules can be opened and sprinkled on to your food if desired. We are now offering a refill service. This is a sachet of capsules which can be put into your original bottle.

Differences in iodine content in all Emerald Isle Seaweed Capsules. 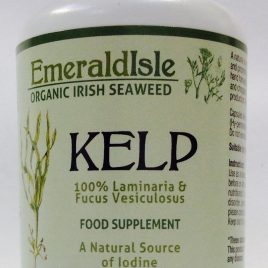 Certified Organic by the Irish Organic Farmers and Growers Association.

Kelp seaweed 90 capsules are a completely natural, organic product and a source of over 70 vitamins and minerals, with nothing added. We treat our seaweed in an entirely natural way, hand harvested, hand dried and chopped. No chemicals or any other substance is used in production. No microwave, or any harmful process is undertake. We are now offering a refill service. This is a sachet of capsules which can be put into your original bottle. “Like all sea vegetables, kelp seaweed capsules provide minerals found in sea water, especially iodine and trace minerals that may be lacking in our depleted soils. For Westerners unaccustomed to including seaweed in the diet, a small daily supplement of kelp, in tablet or powdered form is a good idea, but don’t overdo -excess iodine may also cause thyroid problems.” Sally Fallon and Mary G Enig PhD ; Nourishing Traditions Cookbook.

Health and nutrition claims from the EU commission. 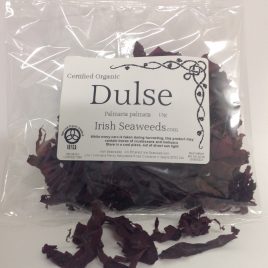 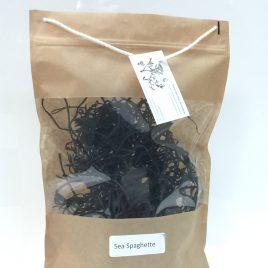